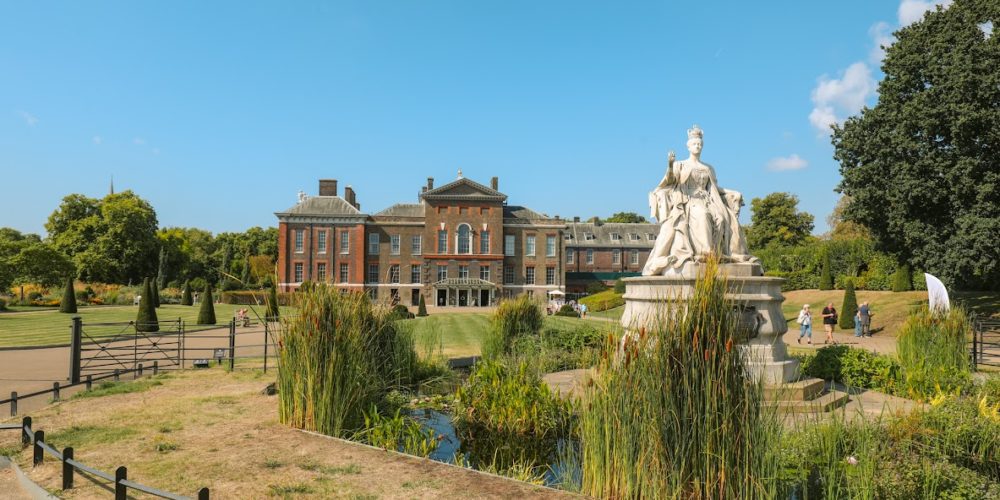 Looking to visit Kensington Palace? Here’s my top Kensington Palace tips including everything you need to know about visiting the royal abode — from a local Londoner and London travel blogger (in other words, you’re in good hands) enjoy!

Perched on the edge of Hyde Park, Kensington Palace is London’s 2nd most royal residence (right behind Buckingham Palace) and the home to the Duke and Duchess of Cambridge — Prince William and Cate Middleton, at least before they moved to Windsor.

Its history spans back over 300 years as everything from a home to Queen Victoria and Princess Diana to more current affairs such as the announcement grounds for Prince Harry and Meghan’s engagement.

Visiting Kensington Palace and feeling like you’ve stepped into royal life is an experience like no one, but you’ll want to be prepared.

Your Ultimate Guide + Tips For Visiting Kensington Palace (from a local)

Before its royal days Kensington was a beautiful mansion home to Sir Daniel Finch, the Secretary of State at the time.

When William III and Mary II assumed the monarch in 1689, they found their Whitehall Palace abode near the Thames to be too agitating to their son’s asthmatic conditions. This started a hunt for a new home and the eventual purchase of Kensington Palace for £20,000 from Daniel Finch.

Since then it has served as a royal residence for ‘minor royals’ for nearly 300 years, with the most notable residents including:

P.S – As you can imagine, the royals like their privacy — so don’t expect to see them popping about during your visit!

Is Kensington Palace Worth Visiting?

Personally speaking, yes. If you’re interested in British history, royalty, or even just exploring London, it’s worth visiting. Especially if you already have the Go City Explorer Pass or The London Pass — Kensington Palace is included on both!

Pro-tip: Although I highly suggest seeing inside the palace, if you would like to experience Kensington Palace for free, you can still visit Kensington Gardens or enjoy views of the palace from outside while you’re exploring Hyde Park

Getting to Kensington Palace

Getting to Kensington Palace is relatively easy as there are lots of transport links. Before you go, I highly suggest downloading Citymapper to help plan your journey.

By River Cruise: If you’re already in the middle of sightseeing pre-Kensington Palace, you can take an Uber Boat from Central London to Battersea Power Station Pier station to do some river sightseeing along the way. Once you get off, go to Stop CJ and take bus 452 towards Ladbroke Grove, it’s 15-minute bus ride to Kensington Palace.

By Train: The closest train station to Kensington Palace is Paddington Station — which serves the Paddington Heathrow Express, TFL Rail Heathrow and the National Rail, followed by a 20-25 minute walk to the palace.

Walking: If you’re exploring Central/West London neighbourhoods such as Knightsbridge, South Kensington, Kensington, Notting Hill, Chelsea, Paddington or Holland Park you’ll most likely be under an hour’s walk from Kensington Palace. This is a great way to see more London sites before your visit, so be sure to check Citymapper to see if you can simply walk over!

P.S – If you’re driving, there’s no parking at Kensington Palace currently so they will need to drop you off at Kensington High Street.

Do I Need Tickets to Visit Kensington Palace?

Although you can visit the Kensington Gardens and surrounding Hyde Park for free, you need a ticket to go tour inside Kensington Palace (and really have the full experience).

You can get the tickets at the door or in advance, but tickets tend to be cheaper if you book online.

P.S – Check out the difference between The London Pass and the Go City Explorer Pass to choose which one’s right for you!

Winter hours in Kensington Palace (from October 31st to March 1st) are Wednesday to Sunday 10:00 – 4:00pm with last admission at 3pm.

The Sunken Garden, which includes the statue of Princess Diana is only open during opening hours in both the Summer and Winter period.

You may also be wondering, ‘when is the best time to go to Kensington Palace?’.

Between October to February crowds are reasonable at most hours, so although getting there early would be best, you won’t have too many long queues either way.

But if you’re visiting in summer, it’s a whole other story.

Between the hoard of school groups, eager tourists, royal enthusiasts and summer park goers, Kensington Palace is sure to be crowded. To avoid the queues I suggest going 20-minutes before opening time on a weekday or close to an hour before closing during a weekday.

The King’s Gallery & The King’s Staircase are a great way to feel like you’ve stepped into Georgian times.

This is where the King would host events and the court in his time and is an instant way to get the royal experience at Kensington Palace.

After William II and Mary II came to the thrown, they bought Kensington Palace to be their ‘home away from home’.

Thus the Queen’s State Apartment was where Mary II would rest, relax, and of course, entertain.

Before she came Queen Victoria, she was Princess Victoria — born and raised in Kensington Palace.

Fair warning, Victoria’s childhood wasn’t exactly pleasant, but the exhibition but does an excellent walk through into what life was really like being raised as a royal during that time.

The Jewel Room features treasured gems from both Queen Victoria and Prince Albert, from dazzling tiaras to earrings and brooches.

All encapsulating the 19th century craftsmanship of the time.

Life Through a Royal Lens:

Life Through a Royal Lens is a rare chance to see an unpolished version of the royals in their most intimate moments.

From never-before-seen pictures of the late Queen Elizabeth II and Prince Phillip to family photo albums, it’s all here.

The Sunken Garden was one of Princess Diana’s favourite parts of Kensington Palace, now serving as an ode to her memory.

Although you can’t go directly to her statue (commissioned by Prince Harry and Prince William to honour her service), I suggest getting as close as you can and taking in all the peace and serenity of the area.

Have Afternoon Tea at The Kensington Palace Pavilion and Tea Room:

One thing I regret not doing while at Kensington Palace was indulging in their delicious Afternoon Tea.

Pro-tip: Use the latest Kensington Palace map from the Historic Royal Palaces to navigate your visit!

How Much Time To Spend at Kensington Palace?

To experience all of the main displays and exhibitions at Kensington Palace as well as Kensington Gardens, I suggest spending a minimum of 1½ to 3 hours.

This will give you time to see to The King’s State Apartment, Gallery & Staircase, The Queen’s State Apartment, Victoria: A Royal Childhood, Life Through a Royal Lens, The Jewel Room, exhibitions, visit Sunken Gardens and have an Afternoon Tea.

You’ll also be surrounded by the rest of Kensington Gardens and Hyde Park, so if you wanted to pop into the shops on Kensington High Street and have a picnic after/before or after your visit — you could easily spend the day here!

There are 3 bathrooms on-site at the Stone Hall, the café or the Pigott Galleries at Life Through A Royal Lens.

You can take photos inside Kensington Palace, without flash, but videography is not permitted (even on your phone!). There are also a few items that can’t be photographed in the palace due to loan arrangements.

If all that Kensington Palace exploring has left you hungry (or thirsty) you can visit either The Café or The Pavilion. The Café is best for a quick hot drink or refreshment, sandwiches, cakes and ice cream.

But if you’re looking for more The Pavilion offers a full Breakfast, Lunch and Afternoon Tea menu.

If you need to bring a carer to Kensington Palace, you’re entitled to a free carer ticket which you can redeem at the visitor check-in. Describer and BSL interpretation tours are also available for the King’s State Apartments and Victoria: A Royal Childhood, but they must be booked in advance. Find more information.

Things to do Near Kensington Palace:

← The Best Bus Routes for Sightseeing in London (for £1.65!)
How to Get a Job in London as an American: A Complete Guide  →

Day in the life of a full-time London travel blogg