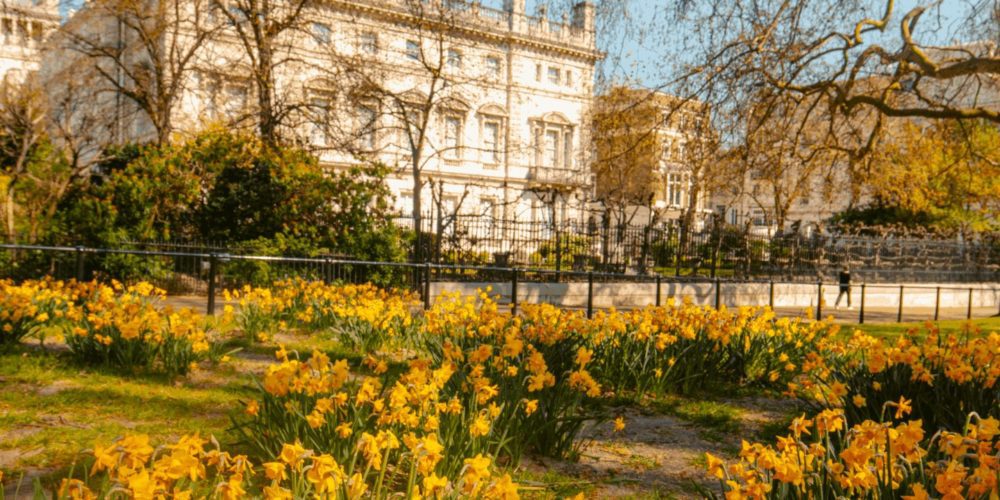 Whether you’re visiting London for a short time or getting ready to move to the Big Smoke, the infamous London weather is sure to have crossed your mind.

London weather can be unpredictable and ever-changing, depending on the season. So here’s a breakdown of everything to expect and how to be prepared for anything the London climate throws at you.

P.S – Be sure to read my packing guide to London for every season after this post to be fully prepared!

In my opinion, the autumn season brings some of the best weather in London.

Temperatures during this time are generally mild, with temperatures ranging from an average low of 10°C (50°F) to a high of around 17°C (63°F).

The weather (in London fashion) can also be unpredictable during autumn and range from a sunny day to heaps of rain showers.

Days also start getting shorter around this time, usually getting dark around 6pm, and the occasional storm may bring strong winds and heavy rains. You’ll also find rainfall increases around November time.

For autumn in London weather I suggest packing:

Despite the chiller weather, there are still loads of things to do in London during autumn.

London parks are beautiful this time of year with a variety of golden leaves, vibrant trees and lovely autumn walks.

You can also dip into the London market scene with a trip to Borough Market or Camden Market for some autumnal foodie favourites.

Although most outdoor activities require a bit more careful planning due to the cooler weather, there’s plenty of ways to enjoy yourself indoors too — from cosy pubs serving seasonal ales; art galleries, theatre shows; and more!

London weather in winter can be quite random and unpredictable (are you sensing a theme here?).

The cold weather during this time is often accompanied by clouds, rain and strong winds that make it feel much colder than it is. So be prepared for it to feel colder than the weather forecast for that day.

During winter, the days tend to be shorter and darker, with slightly less sunlight throughout the season and sunset around starting at about 4pm.

The weather in London during winter also has a tendency to drop quite suddenly in the evening, so always bring a warm coat with you if you’re out exploring — even if you don’t need it in the daytime!).

For winter in London weather I suggest packing:

Lucky for you winter in London means Christmas in London, and with that comes an incredible amount of things to do in the city.

As the temperatures drop and snowflakes (sometimes!) blanket the streets, London transforms into a festive winter wonderland that glistens with holiday cheer.

From shopping at traditional Christmas markets to ice skating in beautiful parks, following hidden light trails and seeing the city decorated to the brim — be sure to read my guide on the best things to do in London during Christmas in London while you’re packing for the season.

Spring in London Weather (March – May)

The weather usually starts becoming more comfortable from around late March to mid-April, when temperatures generally range from 10°C to 17°C (50°F to 63°F).

After that the weather will stay relatively mild and sunny until the end of May when it gradually gets warmer and temperatures can get up to 20°C (68°F).

During this time, the weather in London can be quite enjoyable as the sun starts shining more often and with a refreshing breeze to match.

The days will also start getting a bit longer with sunset starting at about 7:45pm.

For spring in London weather I suggest packing:

In terms of things to do, London is an amazing city to visit in the springtime. With its temperate climate and mild weather, the city comes alive with vibrant spring colors and blooms.

I suggest taking advantage of the many outdoor activities that London has to offer during this season — from exploring all the spring blooms in the city to picnicking in one of London’s many world-famous parks, wandering beautiful neighbourhoods like Notting Hill, taking a leisurely walk around the city or simply gazing out at the city’s iconic monuments like Big Ben and Tower Bridge from a riverside cafe.

Summer in London, like most places, has the best weather you’ll find year-round.

During this time of year, average temperatures reach highs in the mid-20’s Celsius (77°F) and lows in the mid-teens Celsius (59°F).

Over the past few years London has seen record heatwaves in the summer months, with some days reaching into the low 30’s (86°F) and one day last season going up to 40°C (104°F)! But fingers crossed this will never be the norm.

In terms of rainfall this is relatively low compared to other times of year, but there’s still a few showers (particularly during July and August), so it pays to be prepared for wet weather if you’re heading out for the day!

Here’s what to pack for summer in London weather:

Lucky for you summer in London holds endless opportunities for fun, adventure and city exploration.

From picnicking in the city’s many picturesque parks to dining al fresco or taking up a summer pint in a traditional British pubs, you’ll never have a dull moment.

A word of warning that summer is the most busy time for tourism, so if you’re visiting any of London’s attractions make sure you go during off-peak time, preferably on a weekday.

P.S – Be sure to read my summer in London guide for a full list of things to do in the season!

Does it rain a lot in London?

The stereotype regarding the rain in London is one that has become an iconic image of the city. It is often referred to as “the rainiest city in Europe” and the typical perception from people who have never visited London is that it rains constantly. The truth, however, is a little more complicated than this.

London does get its fair share of rainfall, with over 600mm (23 inches) falling each year on average. This makes it one of the wettest cities in Europe for sure, but far from the wettest overall.

In fact, Edinburgh receives slightly more precipitation than London annually (630mm). It’s also worth noting that England as a whole has some of the most unpredictable weather conditions in Europe due to its location at the corner of several different climate zones.

Overall, while there certainly is a degree of truth regarding London’s reputation for having a lot of rainfall each year — it’s important to understand that this isn’t an ongoing problem throughout every season or all areas within the city itself; there are plenty of dry spells mixed with wet spells throughout each month and year depending on where and when you visit!

But either way…having an umbrella in London is always a good idea.

Read More: How to Spend a Rainy Day in London: A Local’s Guide

Does it snow in London?

Yes! It does snow in London, but only very very occasionally.

The average amount of snowfall per year is around 5 to 10 cm (2-4 inches). But generally speaking, London rarely gets enough snow to stay on the ground for more than a day or two at a time.

Read More: When Does it Snow in London? Your Ultimate London Snow Day Guide

What should I pack for each season in London?

As you can see from this post, the theme with London weather is never too hot, never too cold, and always a bit unpredictable.

Because of this you should always be prepared for any weather change London may throw at you throughout the day. This includes wearing layers and of course, always having an umbrella!

I hope this guide was helpful and don’t forget to read up on what to pack for every season in London before you trip. And let me know it goes on @candaceabroad!

← The Best Breakfast & Brunch Spots in Stratford (from a Londoner)
The Best Things to do in Stratford, London →