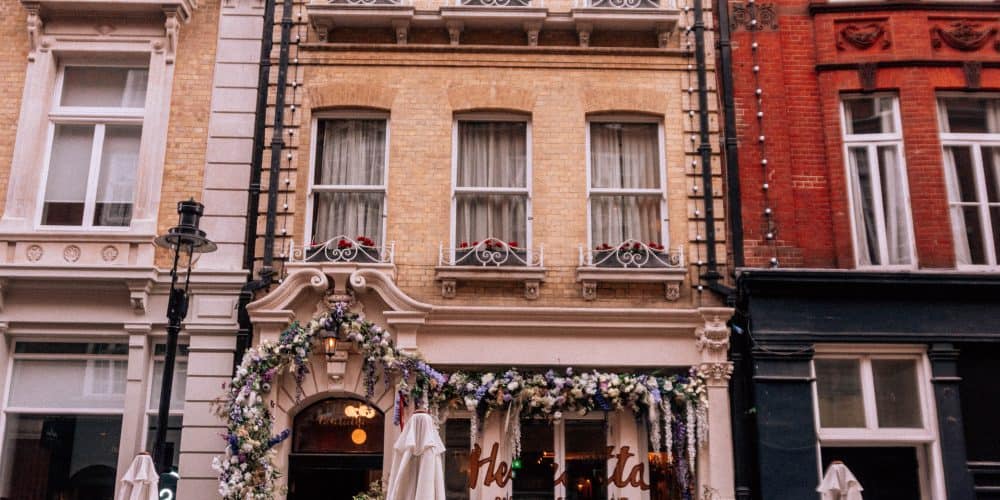 Looking for some lovely London quotes? Here’s my personalized roundup of all the London quotes that make you fall in love with the city all over again. Enjoy!

If you follow me on Instagram, you know I love my quotes. Every day I share my favorite and when it comes to London, I’ve got a few. 29 to be exact. From movies to books, poems, and everything in between, Londoners have a lot to say about this city.

It’s magical, it’s chaotic, it’s charming, it’s home, and within a few months of being a Londoner I instantly fell for the Big Smoke. Four years later here are all the London quotes that bring the city to life for me. From profound to witty they embody London to a T. I hope you fall in love with London and these quotes as much as I have.

1. “The vibe of London as a city is captivating. It’s both fast-paced and extremely rushed but still has the calmness that would attract any big-city person.”

2. “There are two places in the world where men can most effectively disappear — the city of London and the South Seas.”

3. “London goes beyond any boundary or convention. It contains every wish or word ever spoken, every action or gesture ever made, every harsh or noble statement ever expressed. It is illimitable. It is Infinite London.”

5. “It is not the walls that make the city, but the people who live within them. The walls of London may be battered, but the spirit of the Londoner stands resolute and undismayed.”

6. “I’ve been walking about London for the last 30 years, and I find something fresh in it every day.”

7. “One of the the things I most liked about the city – apart from all its obvious attractions, the theatre, the galleries, the exhilarating walks by the river – was that so few people ever asked you personal questions.”

8. “It is difficult to speak adequately or justly of London. It is not a pleasant place; it is not agreeable, or cheerful, or easy, or exempt from reproach. It is only magnificent.”

9. “The English language is like London: proudly barbaric yet deeply civilised, too, common yet royal, vulgar yet processional, sacred yet profane.”

10. “In London, everyone is different, and that means anyone can fit in.”

12. “Why, Sir, you find no man, at all intellectual, who is willing to leave London. No, Sir, when a man is tired of London, he is tired of life; for there is in London all that life can afford.”

13. “In this city 300 languages are spoken and the people that speak them live side by side in harmony. This city typifies what I believe is the future of the human race and a future where we grow together and we share and we learn from each other.”

14. “Oh, I love London Society! It is entirely composed now of beautiful idiots and brilliant lunatics. Just what society should be.”

15. “London is a cluster of communities, great and small, famous and unsung; a city of contrasts, a congregation of diversity.”

16. “My Dad says that being a Londoner has nothing to do with where you’re born. He says that there are people who get off a jumbo jet at Heathrow, go through immigration waving any kind of passport, hop on the tube and by the time the train’s pulled into Piccadilly Circus they’ve become a Londoner.”

17. “The best bribe which London offers to-day to the imagination, is, that, in such a vast variety of people and conditions, one can believe there is room for persons of romantic character to exist, and that the poet, the mystic, and the hero may hope to confront their counterparts.”

19. “A bad day in London is still better than a good day anywhere else.”

20. “I like the spirit of this great London which I feel around me.”

21. “To walk alone in London is the greatest rest.”

22. “London’s greatest strength is our diversity.”

24. “When exploring London, you will come across lots of excitement by chance, so try to take everything in rather than just rushing around to all of the major tourist haunts.”

25. “Aesthetically, London is just beautiful; it’s a gorgeous city. The architecture, monuments, the parks, the small streets – it’s an incredible place to be”

26. “I came to London. It had become the center of my world and I had worked hard to come to it. And I was lost.”

29. “There’s nowhere else like London. Nothing at all, anywhere.”

I hope you loved reading these London quotes as much as I did!

If you liked this post be sure to explore the beauty of London on the blog and read 50 reasons to love London!