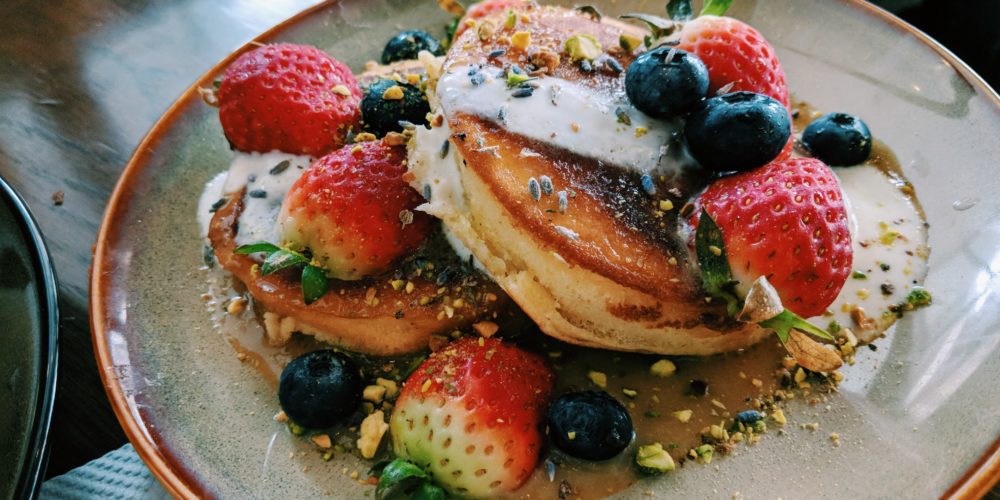 Between being surrounded in West End charm and riverside goodness, you’re bound to enjoy starting your day with breakfast in Paddington, London.

Where to Brunch in Paddington, London: 10 Best Breakfast Places

A post shared by Aussie cafes in London (@daisygreencollection)

It’s hard to talk about the best Paddington brunch spots without mentioning Darcie & May Green.

The Australian chain has locations dotted across London (serious question — why do Australians make such great breakfast? They always have the best brunch spots in London) and Darcie & May Green is perhaps their most eccentric.

The gorgeous Paddington breakfast spot is held on a colourful barge based on the Grand Union Canal, very close to Paddington Station — with a brunch menu made for dreams.

Have a go at their oh-so-Aussie breakfast with a sweet choice of Golden Gaytime Pancakes to Peach Melba Coconut French Toast and savoury Sweet Corn Fritters, or their Dirty Daisy take on a Full English.

Then again, they do bottomless brunch too.

P.S – If you’re looking for a vegan or vegetarian breakfast in Paddington, Darcie & May is great at plant-based breakfast — Summertime Portobello anyone?

Read More: The Best Things to do in Paddington, London

Pergola Paddington is where West Londoners go to have a good time.

Sundays are for brunching at the hidden Paddington oasis, with endless flowing prosecco, beer or cocktail spritzers for £30 per person.

Unlike most Paddington breakfast places, you’ll have a variety of options here as the Paddington Pergola holds three self-service restaurants within the venue.

Overall this is a great Paddington brunch spot if you’re going out with a group for a boozy weekend morning.

Add a bit of culture to your brunch in Paddington with breakfast at the Mihbaj Café & Kitchen.

Inspired by Jordan/Palestine cuisine be prepared for a tastebud journey here, with everything from Fluffly Ijjeh (a traditional Middle Eastern omelette) to a Levantine Continental Breakfast to start your day.

4. The Union at Paddington Central

The Union at Paddington Central is a staple Paddington brunch spot known for their fresh ingredients and hearty breakfast menu.

Indulge in a morning of leisurely breakfast with Eggs California with smashed avocado or dip into their homemade waffles with treacule cured bacon (dripping in maple syrup, may I add).

It’s also makes the list for the best breakfast near Paddington Station, less than a 10-minute walk away!

Hidden behind Paddington’s most Instagrammable brunch spots is the ever-lovely Sheila’s Cafe.

Their interiors are no-frills and their menu is no-fuss, but that’s exactly why I love it.

Filled with a plain, simple and delicious breakfast menu — take a seat and enjoy views of London while feasting on just about the best English breakfast in Paddington (without breaking your wallet either).

I’m always on the lookout for family-owned brunch spots in London, so finding Bonne Bouche Paddington felt like hitting the jackpot.

The family-run Paddington breakfast spot has been kicking it for over 50 years — serving a wide selection of doughy pastries and cakes for a sweet start to your West End day.

A coffee, almond sausage and sausage roll is my go-to here. But if you want to up it a notch, give their caramel slices a try too.

For a breakfast as aestetic as it is delicious, look no further than The Summerhouse.

It also offers stunning views across the canal, i.e a great Paddington brunch spot if you’re looking to impress.

Mimos Cafe is unapologetically Italian, with a yummy breakfast menu to match.

Small yet mighty this Paddington brunch spot has all the favs (cue Full Englishs’ and Omelettes galore, or eggs fried any way you like).

Just don’t expect Instagrammable interiors and you won’t be disappointed.

P.S – They’ve got a delicious Vegetarian Breakfast too!

For a vegan breakfast in Paddington like no other, try Yeotown Sussex Gardens.

The new kid on the Paddington breakfast scene has passed the test with flying colours — serving deliciously healthy breakfast finds like fresh caramalised figs on toast and a mean Vegan English Breakfast.

They also do loads of health retreats throughout the year and and have lovely outdoor seating for dining al fresco, London-style.

A post shared by Aussie cafes in London (@daisygreencollection)

Beany Green is another leg of the Daisy Green branch, and is just as delicious as its Darcie & May counterparts.

Tucked on Regent’s Canal you can soak up West London life for the day while you order Blueberry Pancakes and The Bondi Breakfast (with charcoal sourdough toast, poached eggs, back bacon, chilli and fennel sausage, house pesto and more!).

They also hold one of the best bottomless brunches in Paddington — including one sweet dish, one savoury and free-flowing bubbly for 1½ hours.

Map of The Best Brunch Spots in Paddington