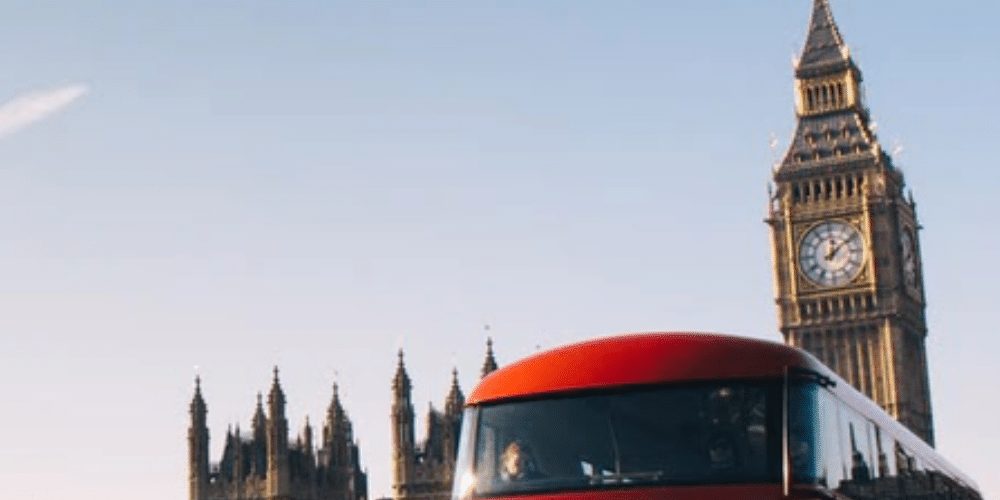 Looking for the best routes for sightseeing in London? Skip the on-and-off bus tours and see London like a local with the best bus routes to take in the city sights, all for £1.65.

If you’re visiting London for any amount of time you’re bound to want to see the city by bus. And I can’t blame you. I mean, what’s more iconic than cruising past Big Ben and Westminster Abbey on a big red double-decker bus…I’ll wait.

But, I’ll let you in on a little secret. There’s tons of bus routes across London that don’t require a fancy tour guide and pre-booked tickets.

All you need is an Oyster card, a little speed (to run to the top deck seat) and you’re on your merry way to gorging on some of the best views of the city, all for £1.65.

Now of course, if you’re keen for a proper tour guide and sightseeing experience, there’s nothing wrong with hopping on a bus tour (just make sure it’s a cool one). But for the rest of us, here’s the 5 best bus routes in London for sightseeing, Candace approved.

Bus 11 has gained a reputation for being the closest you can get to a sightseeing tour, all for the price of £1.55. So I checked in out. Hopping on at Fulham Broadway and whizzing through the city until I ended up in the heart of Liverpool Street.

For this journey, start at Fulham Town Hall (Stop R). On route, you’ll see the famously beautiful Chelsea road and glide through Belgravia until you end up in Westminster, and it’s pretty much all eye candy from there.

The St.Paul’s Cathedral view is breathtaking, but you’ve equally got Westminster Abbey, Westminster Cathedral and the Houses of Parliament to soak up along the way. You’ll also pass the Royal Courts of Justice (hey Bridget Jones) as you continue through the historic Strand and London’s financial district.

Once you’ve watched the city go by, you’ll realize you’ve suddenly landed right plop at Liverpool Street station. Reward yourself with a visit to Spitalfields market or a jaunt to Shoreditch.

I’ve always loved Pimlico and adored Hampstead Heath, so imagine my surprise when I found out you could see both in one route…and snag amazing views along the way — heaven.

Wait for your carriage to arrive at Victoria Station (Stop J) and take in the grandeur of Westminster and Downing Street before saying hey to the friendly lions at Trafalgar Square.

You’ll also get a great glimpse of the theatre district from here before making the trek into the belly of Camden (I would suggest hopping off here to explore before continuing on your journey).

Before you know it, you’ll realize you’ve made it all the way to leafy Hampstead. And can proceed to give yourself the city break you deserve after all that sightseeing.

Bus number 9 is one of the oldest routes in London, with impossibly charming views.

Beginning at Aldwych Bus House (Stop H) you’ll pass one of London’s most affluent neighbourhoods before you’re flung into views of the Somerset House. After which, you’ll find yourself along the Strand going all the way to Trafalgar Square.

If you keep your eyes winced, you’ll also catch a full glimpse of the famous Hyde Park (and Green Park) along Piccadilly.

Just like that it’s time for the crème de la crème of London — Knightsbridge. The luxurious London neighbourhood will leave you with plenty to gawk at — from the world-renown Harrods to just about every designer shop you can imagine on every corner.

You’ll also make your way past Kensington Gardens and High Street (worth the pit stop) as well as Holland Park before ending up in Hammersmith.

To enjoy a bit of the finer London life (well, by bus) you’ll definitely want to head onto bus 74, taking you from Baker Street Station (Stop A). Passing through all the high street shops, dazzling Park Lane and the charm South Kensington, it’s absolutely lovely.

After you’ve finished all your ‘ooing and ahhing’ you’ll have centre stage views to the liveliness of Earls Court.

You can stop off here for a little jaunt or happily continue onto West Brompton. There’s a gorgeous cemetery here that’s also worth visiting at the end of your journey (especially in autumn!).

And lastly, the ever enjoyable bus 139. The good news is if you’re already sightseeing, you’ll be at a great starting point from Waterloo Station / Tenison Way (Stop J).

Once you’ve hopped on you’ll instantly be met with striking views of the Somerset House before you mosey along to Covent Garden.

You’ll probably get FOMO of all the action going on in the area (I mean…it is Covent Garden) so consider having a little peak around (or a quick walking tour) before continuing onward.

A short but sweet ride along will lead you to Trafalgar Square, before taking you into the heart of Picadilly Circus (you’re gonna wanna get your camera out for this).

Bond Street and Selfridges & Co. will come up next, followed by Abbey Road — get out and get your Beatles pictures!!

Tips for taking the Best Bus Routes in London for Sightseeing

• Thanks to the Hopper Fare, you can ride London’s buses as many times as you like within one hour of tapping in

• If you’re touring London, you can choose bus routes according to your travel itinerary for the day, (kill two birds with one stone kinda thing)

• Snag a seat at the front of the top deck 😉

Map of the Best Bus Routes in London for Sightseeing

save to your phone!